Brothers in Islam! What are the blessings of Hajj? One may describe them in great detail. But, in the Qur’an, where Allah instructs Ibrahim to invite people to come to Hajj, it is said:
“So that they may witness things that are of benefit to them.” (Surah al-Hajj 22: 28)
Hence, the real blessings of Hajj can only be experienced by those who actually perform it. Imam Abu Hanifah, it is narrated, was unsure which act of worship was more excellent among the various ones laid down by Islam. But once he had performed Hajj, he had no hesitation in declaring that Hajj was the most excellent of all.
Still, I shall now try to give you, briefly, some idea of its blessings.

We usually think of journeys as of two kinds: those made for business and those made for pleasure. In both cases, it is to fulfill your worldly desires and benefit yourselves that you leave your homes, separate from families, spend money – all is done for your own sake. No question arises of sacrifice for any higher, sublime purpose. 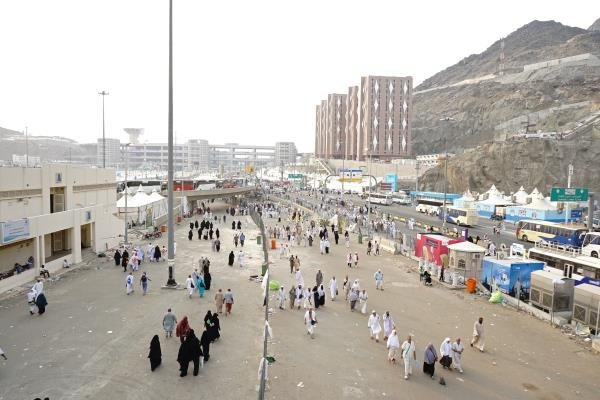 But the journey that is the Hajj is quite different in nature. This is not meant for any personal end. It is undertaken solely for Allah, and the fulfillment of the duty prescribed by Allah. Nobody can be prepared to undertake this journey until and unless he has love of Allah in his heart as well as fear of him, and is convinced that Allah wants him to do what he is doing. That you are willing to bear the privations arising from separation from your family, to incur great expenses on a journey that will bring no material rewards and to suffer any loss of business or job, all are signs of certain inner qualities: that you love and fear Allah more than anything, that you have a strong sense of duty to Him, that you are willing to respond to His summons and ready to sacrifice your material comforts in His cause.

You will find that your love of God heightens as you start preparing for your pilgrimage journey, with the sole intention of pleasing Allah. With your heart longing to reach your goal, you become purer in thought and deed. You repent for past sins, seek forgiveness from people whom you might have wronged, and try to render your due to others where necessary so as not to go to God’s court burdened with injustices that you may have done to your fellow beings. In general, the inclination for doing good intensifies and abhorrence for doing evil increases.

After leaving home, the closer you get to the House of God, the more intense becomes your desire to do good. You become careful so that you harm nobody, while you try to render whatever service or help you can to others. You avoid abuse, indecency, dishonesty, squabbles and bickering, because you are proceeding on the path of God. Thus your entire journey constitutes an act of worship. How can, then you do wrong. This journey, in contrast to every other, is a continuing course through which a Muslim attains a progressive purification of the self. On this journey, then, you are pilgrims to God.

Ihram and its Conditions 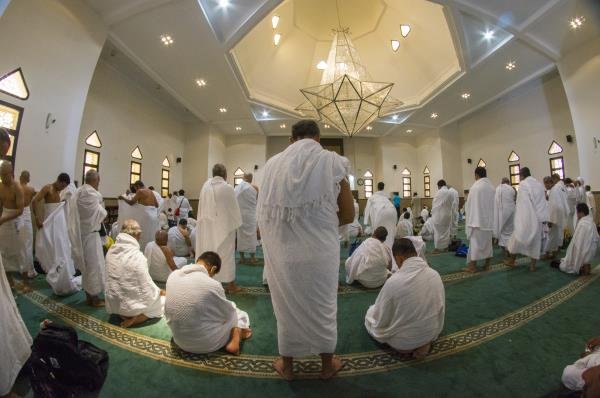 When the pilgrim reaches a certain point in his journey on the way to Makka, he must put on Ihram, the mendicant-like clothes consisting of two unsewn sheets of cloth and a pair of sandals. What does putting Ihram symbolize: whatever your position in the world, before God you must come as a beggar and destitute, as in outward appearance so in the depths of your heart. Take off your colorful clothes; put on simple ones. Do not wear socks. Keep your heads bare. Do not use any perfume, nor comb your hair. Do not use any kind of adornment. Stop sexual relations with your wives, refrain even from any gestures, which may arouse eagerness for, and be reminder of, these relations. Do not hunt, and do not help anyone you see hunting.

Adopting such outward postures will influence your inner lives also. You will develop an ascetic attitude. Pride and vanity will disappear. Humility and peace of mind will grow. The impurities that have sullied your souls due to indulgence in worldly pleasures will be removed and a feeling of godliness will dominate both your internal and external selves.

Talbiyyah: the Cry of Response

Soon after putting on Ihram the pilgrim utters certain words that he must repeat in a loud voice after every Prayer, when climbing a height and descending from it, when meeting other pilgrims and when getting up in the mornings. These words are:

This, in fact, is an answer to that general proclamation which Ibrahim, as commanded by Allah, made more than four thousand years ago: O slaves of Allah! Come to the House of Allah. Come from every corner of the earth, either on foot or by transport.

Thus, with every cry of labbayk the pilgrim answers God’s summons; every time he answers His summons he becomes more closely knit with that movement which has been inviting to true and genuine worship of the One God since the time of Ibrahim and Isma’il. The distance in time of four and a half thousand years vanishes and it appears as if Ibrahim is here calling on behalf of Allah and the pilgrim is answering his call.

At every step, as the pilgrim, thus responding to Ibrahim, proceeds further and further, the yearning and longing get more and more intense. At every ascent and descent the voice of Allah’s proclaimer rings in his ears and he goes on and on welcoming it with labbayk. Every group of pilgrims appears to him like a message-bearer of is Lord; and, like a lover, on getting the message from his beloved, he cries out: “I am present, I am present.” Every morning is a message from his Friend to which he has but one answer: “I am at Thy service.”

This recurrent cry of labbayk in conjunction with the ascetic dress of Ihram, the special nature of the journey and the feeling of getting nearer and nearer to the Ka’ba combine to produce in the pilgrim the feeling of being enveloped in Divine love; nothing of any importance any longer resides in his heart except the remembrance of his Friend.

Tawaf: Walking Round the House 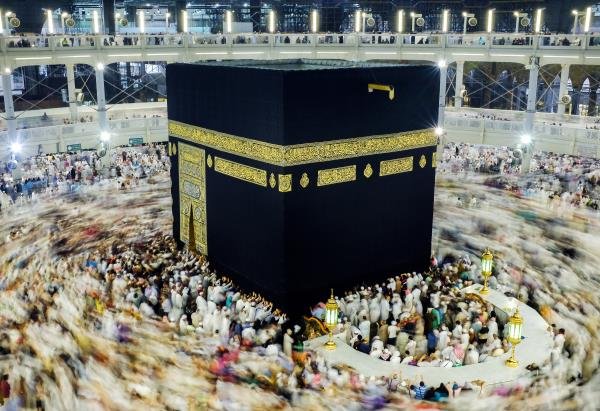 Thus overwhelmed with the love of God, the pilgrim reaches Makka, and immediately proceeds towards the sacred precincts to which he has been summoned. He kisses the ‘threshold’ of his Friend’s house. Then he goes round and round it, the focus of his faith, the hub of his life. Every round he starts and ends by kissing His ‘doorstep’, symbolizing a renewal of his pledge of allegiance and loyalty and obedience to his Lord and Master. [*]
[*] Some ignorant people object to the kissing of the Black Stone, arguing that it is a kind of idol worship. It is in fact no more than a symbol for kissing the ‘doorstep’ of the Master. The circumambulation of the Ka’ba starts where the Black Stone is fixed and, during the seven rounds, it is either kissed or touched, or a sign is made towards it ate the end of every round. There is not the slightest vestige in this or worshipping it. That the Stone itself is ascribed no power is demonstrated very well in what ‘Umar is reported to have said while kissing it: You are a mere stone. If the Prophet, blessings and peace be on him, had not kissed you, I would have never kissed you.
After completing the seven rounds, he goes to the place where lies the stone on which Ibrahim stood and called men to the House of God, called Muqam Ibrahim. He then offers two rak’ahs of Prayer to thank God.

Sa’i: Hurrying Between Safa and Marwah

From Muqam Ibrahim he proceeds to climb the hillrock of Safa, from where he looks down at the Ka’ba and cries out:
La ilaha ill allah wa la na budu illa iyyahu mukhlisina lahu d-dina wa law kariha l-kafirun
There is no God by Allah. We worship none but Him, making exclusive for Him our submission, even though Kafirs may dislike it.
Then he hurriedly walks between Safa and the other hillock, Marwah. This act, which is called Sa’i, symbolizes that the pilgrim will be ceaselessly endeavoring to serve his Master and seek His pleasure. 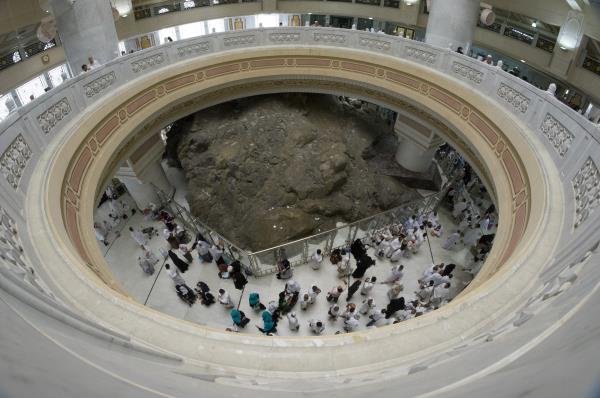 In the course of this Sa’i, he may say:
Allahumma ista’milni bi sunnati nabiyyika wa tawasffani ala millatihi wa a’idhni min mudillati I-fitan
Grant me to live, O God, the way, as was Thy Prophet’s way, and to die on his path. Protect me from trials, which lead astray.

Or he may say:
“Rabbi ghfir warham wa tajawaz ‘amma ta’lam, innaka anta ‘l-a’azzu ‘l-akram.”
“O Lord! Forgive me and have mercy on me and overlook all that Thou knowest I have done wrong. Thou art the Mightiest and the Noblest.” Can Hajj really get CANCE... 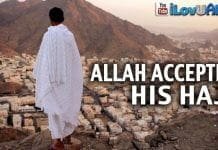 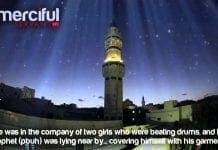 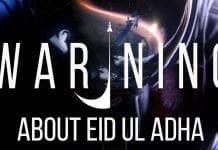 A Warning Message About E... Allah does this on the da... 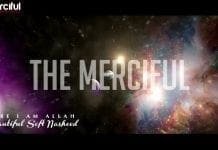 This story will move you ... 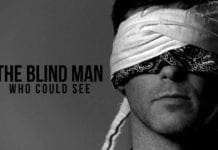 The Blind Man Who Could S...